The following article was first published in 2019, in the context of the 7th edition catalogue of the MDFF Milan. The short photographic film“Changing Perspectives. The Evolution of Ivanpah Solar”, selected and curated by Annie Markitanis as part of the program, was screened as an Italian Premiere.

“I am fascinated by the visual energy and tension created at the intersections of nature and human activity. Uniquely as a species, we consciously modify and use the environment for our perceived needs or enjoyment. Sometimes we consider the future consequences of our actions. More often, we focus myopically on the short-term utility of land and resource use. We are now at a critical juncture in the evolution of our species. How we choose to live on Earth in the next few decades, with a rapidly growing human population and expanding consumption patterns, may determine not only our prospects for survival but also the ultimate viability of the global ecosystem.” _Jamey Stillings

The etymology for Jamey Stallings’s work lies in a series of excelling documentary, commercial, and fine art projects – all paradigms of a refined way of paying attention. Through his photographic articulation, he motivates public consciousness towards essential aspects of our urban and natural reality. Stillings relies on his aesthetic interest in the human-altered landscape and his concerns for environmental sustainability to report on social and environmental issues, principal pillars in his work.

His series Changing Perspectives. The Evolution of Ivanpah Solar has been published around the world including The New York Times Magazine, National Geographic, Le Monde, Neue Energie, New Scientist, Newsweek Japan, Der Spiegel, Du Magazin, Time Magazine and Wired, and has been exhibited in the United States (the United States Library of Congress acquired a portfolio of this work for its historical record), Argentina, Australia, Canada, China, Columbia, England, Japan, Mexico, The Netherlands, and Russia.

In this photographic journey, Stillings documents poetically the process of preparation and construction of the largest concentrated solar thermal plant in the world found in the Mojave Desert in California: Ivanpah Solar—a ‘Hoover Dam’ of its day. 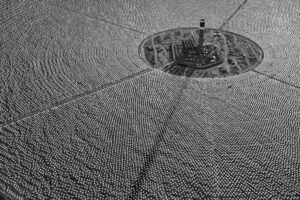 A 2010 brief flight over the future site of Ivanpah Solar, before its mega-construction began, initiated a four-year exploration for new perspectives and contradictions within the environmental movement, local communities, the energy industry, and the general public.

The film is an aerial and ground-based study that begins with a dramatic view of the arid desert landscape, then guides us through the evolving geometric formations of boundary fencing, service roads, and moved earth, as they slowly transform the organic forms of erosion gullies and desert vegetation. Gradually, the structures of a solar power plant emerge. Three 140-meter towers rise from the desert floor, while 173,500 large heliostats (347,000 giant mirrors), also named ‘solar workhorses of the desert,’ encircle them. Ivanpah Solar is a concentrated solar thermal power plant with a 392MW capacity, enough electricity for 140,000 homes. In early 2014, the plant began delivering electricity to California’s power grid.

The project shares both the promise and the challenge we face in building a sustainable civilization for ourselves and future generations. It encourages a more constructive conversation about our physical and emotional ability to adapt from a society that relies on fossil fuel collectively—coal, petroleum, and natural gas—towards a renewable energy-based society.

The textures, lines, details, shapes, and light, in Stillings’s meditative and unusually perceptive black and white photographs, become investigative agents throughout this photographic testimony. The photographs’ seemingly detached viewpoint provides a figurative and literal representation of the breadth of information to be revealed. 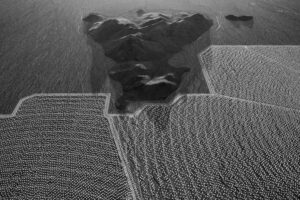 © Jamey Stillings, All Rights Reserved, 21 March 2013, A hill formation rises above the alluvial slope at the eastern boundaries of Units 2 and 3 with heliostat installation complete

Stillings instills a dialogue between our past and the cruciality of meeting our needs and satisfying our wants by seeking equilibrium and a harmonious relationship between nature and human activity. He challenges and invites the viewer to reflect upon such questions as: What about land and resource use? How does the planning and construction of Ivanpah Solar voice global concerns connected to future environmentally responsible energy projects? What defines an environmentally conscious energy project? Where are we heading? What is the opportunity cost of our unrelenting pursuit for energy within a consumption-dependent culture? How do our growing demands impact, and reshape our natural, rural, and urban realms? What are the tools we possess or require in order to revisit with a critical mind and eye the decisions we make, actions we take, and choices we may or may not have? What are we looking for, and how far are we willing to go to get it? What are we able and willing to do, or not? 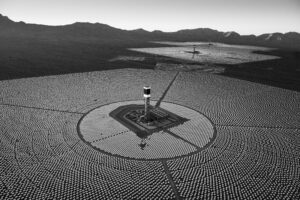 Changing Perspectives. The Evolution of Ivanpah Solar is an exemplar of how fine art documentary photography can be a source of inspiration, motivation, and information – a daring and valuable attempt to nurture a more precise understanding and an unobstructed ‘reading’ of large-scale renewable energy projects.

Stillings’s work acts as a universal narrative of the evolution of humanity and metaphorically assumes the role of an external ‘healthy’ voice reminding us that a carbon-constrained future for our civilization can, or rather, needs to be accompanied by a responsible and sustainable attitude.